As you may have guessed, I am working my way through all of the outdoor sports that the Hayward Lakes area has to offer: trail running, fat tire biking, paddle boarding, and today, four-wheeling! Not the traditional Hayward kind, where I take my ‘98 Dodge Ram out in the middle of the woods, get it stuck, and call my wife to drive my Chevy out to pull it out. No, this was me and the indomitable Don Mrotek cruising the Seeley/Cable area in a Polaris Razor, courtesy of Hayward Power Sports. Here’s a shot of Don and Jane “The Boss” Schroeder in front of the vehicle: 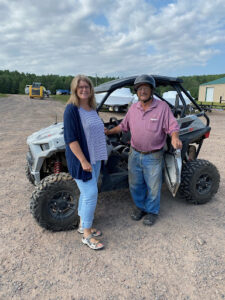 Before we could hit the trail, Don and I went inside to sign a release and get me a helmet. Normally there would also be a safety talk and an introduction to the ATV, but since Don is a fixture at Power Sports and would be doing all the driving, that wasn’t necessary.

We headed northwest on trail 15, to Phipps Fire Lane, then north some more to Janet Rd. For those of you who 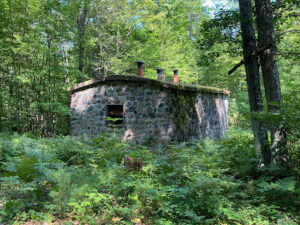 know the ATV trails, we took 77 north to 8, 8 southwest to Boedecker Rd., and Northern Lights Rd. to OO and then the Sawmill.

If you are a denizen of Seeley, you won’t be surprised to learn that the Seeley area was the highlight of my trip. As we were motoring down Boedecker, I suddenly yelled “Stop!” at Don. “That’s the road up to the Dynamite Shack!” Since Don had heard of the Shack but never seen it, he was willing to park the ATV and walk up to the shack with me. This is what it looks like:

My understanding of this structure is that, in the old days of Hayward logging, it was built as a more or less safe storage facility for dynamite, which was used to blow out stumps. However, Don added to my lore when he saw the sign on the doorpost that said “Camp 42.” “This was Frank Romnes’s deer camp,” he said. “He had a county permit to use this building as his deer shack.” Outside of the shack we saw where a pole had been lashed across two trees, to hang Frank’s deer from. Evidently that was a long time ago, because the trunks of the trees have grown around that pole and incorporated it. Don and I both thought that the shack was very cool and should be preserved and appreciated somehow.

The next stop, as I noted earlier, was the Sawmill Saloon. Everybody in the area already knows the Sawmill, so here’s a picture just for you out-of-towners: 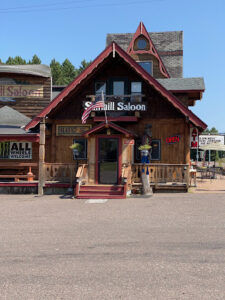 Bear in mind that this is just a picture of the entrance. Once you enter, the Sawmill is like a rustic shopping mall of eating and drinking. The good old bar and grill also now features a coffee shop, a stage for performances, an outdoor grill and dining area, and a couple of rooms that look like parlors or museums or some such. Every time I’m in the Sawmill, I shake my head and say “Man.” Anyway, I had a California burger and Donny had a patty melt, and they were both GREAT. It was too early to drink beer, so I had a Lite.

We reluctantly dragged ourselves out of the Sawmill, where we saw a parking lot FULL of ATV’s.  It looked like this:

(Keep this in mind when you consider the fact that the Sawmill is for sale.)

We went south on 63, east on Thannum Fire Lane, then took 31 down to Phipps Fire Lane and over to trail 15, BKA the Duane Mrotek Memorial Trail. I have been running on that trail for a couple of decades, but now that I know that it’s named after Don’s dad, I will appreciate it a lot more.

The DMMT took us straight back to Power Sports. Most of the trail looked a lot like this next shot…

On most of the trails we drove, we were going about 25 mph, but the sensation of speed when you’re in a four-wheeler on a narrow wooded trail is different. It felt like 60. We’d head into a turn or over a blind hill and I’d be glad Don was driving. You might think that it’s as easy as driving a go-kart, but there’s a real knack to reading the road bed, the turns, and the hills. If it was me driving, we’d still be out there going about 8 miles an hour.  My ATV experience is confined to hauling dead deer and leading a pack of cross-country racers, so I’ve probably never driven over 12 mph. I also have to say that not only is there a ton of signage out there to keep ATVers on the proper trail, but they are also a community of people who are very conscious of not going where they don’t belong.

I have always been a silent sports guy. I still am. That said, I have to admit that ATV’s are a lot of fun and do demand a certain level of skill. They also enable you to cover a LOT more ground than on foot. As I said to Don, I would love to dress in running gear and rent a four-wheeler, so I could drive to and explore every single trail in the Seeley/Cable area that has made me say, “I wonder where that goes.” 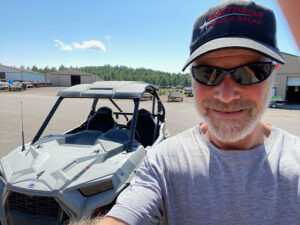 Check out our sponsors

Scroll To Top
Change Location
Find awesome listings near you!